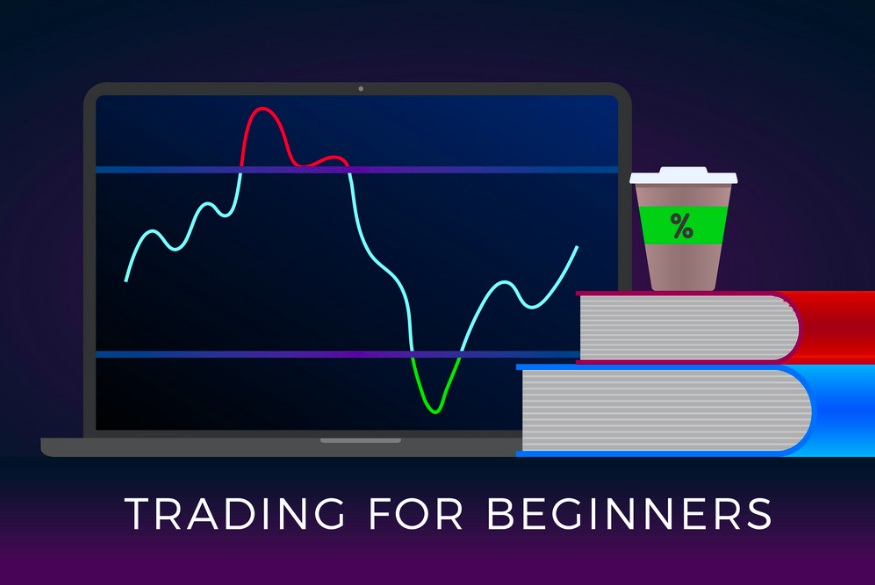 An Introduction to Forex Trading For Beginners | 2020

If you’ve ever travelled to another country, the chances are you have visited a currency exchange booth and exchanged your money into the currency of the country you were visiting. It’s very likely (unless you were 8 cocktails in and trying to exchange your money at the airport) that you noticed a screen displaying different ‘exchange rates’ for different currencies.

For the sake of this article, let’s assume you made it to the counter (and were sober) and exchanged $500 into Japanese Yen. That’s 50,000 Yen! Bet you thought you were rich…

When you exchanged your money, you essentially participated in the forex market! You’ve exchanged one currency for another. Or in forex trading terms, you’ve sold Dollars and bought Yen.

Then before you flew back home, you stopped by the currency exchange booth again to exchange 500 Yen that you miraculously had left over (Tokyo is expensive!) and you noticed the exchange rates had changed whilst you were on holiday.

The currency exchange booth gave you $6 rather than $5 and you could now afford the super expensive sandwich you spotted downstairs in the airport! Life was good again!

Well, it’s these changes in the exchange rates that allow traders to make money in the foreign exchange market.

Now, let’s think about this on a bigger scale…

A large international company may need to pay for new software in a different currency. The exchange rate fluctuates continuously so these few pennies here and there add up very quickly. This means that your losses can end up being huge, but it also means your profits can be yuuge (“huge” in Trumpglish).

Forex is short for ‘foreign exchange’ (sometimes abbreviated to just FX) and is the largest, most liquid market in the world with an average daily trading volume exceeding $5 trillion.

That’s trillion with a “t”!

And it’s a market that rarely closes! The forex market is open 24 hours a day and 5 days a week, only closing down during the weekend. (What a bunch of slackers!)

So unlike the stock or bond markets, the forex market does NOT close at the end of each business day. Instead, trading just shifts to different financial centres around the world.

The day starts when traders wake up in Auckland/Wellington, then moves to Sydney, Singapore, Hong Kong, Tokyo, Frankfurt, London, and finally, New York, before trading starts all over again in Wellington!

Unlike many other financial markets, forex traders can make money on the up when things are going well in the world and also on the down, when things aren’t going so well…

How does forex trading work?

To trade forex is to essentially buy and sell currencies – with the aim of making a profit.

Forex trading will always involve two currencies at a time, the base currency and the quote currency. The difference in price is where you’ll make your profit or loss.

Currency symbols always have three letters, where the first two letters identify the name of the country and the third letter identifies the name of that country’s currency, usually the first letter of the currency’s name. 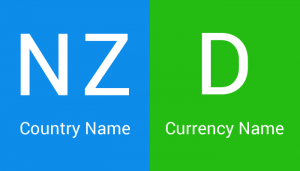 Below, we list all major currencies by their symbol, country where they’re used, currency name, and their nicknames. 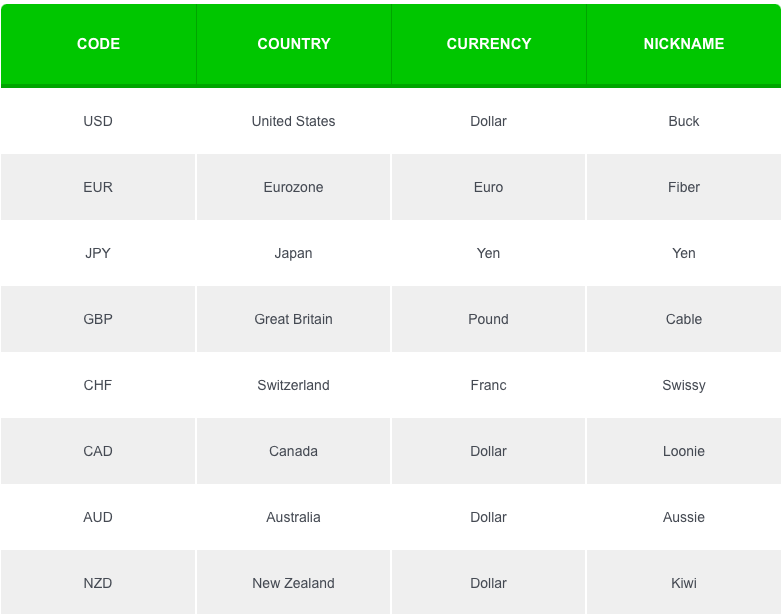 What are currency pairs?

Forex is all about speculating on the fluctuating currencies between two countries. These two currencies are referred to as ‘currency pairs’ and they’re made up of the base currency and the quote currency.  One of the most traded currency pairs is the Euro against the Pound, which is normally presented as EUR/GBP. 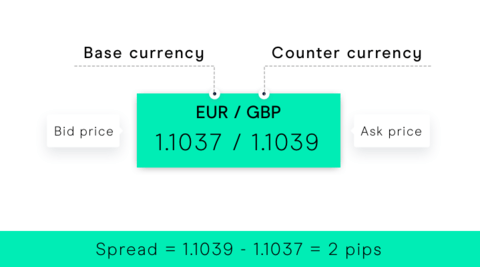 What’s a base currency?

This is the first currency set that appears in the forex pair. It’s the one that’s bought or sold for the quote currency. In the example above, the EUR is the base currency.

This is the second currency that appears in the pair, and is also known as the ‘counter currency’. In the example above, the GBP is the quote currency.

This is the price that a trader is willing to buy a currency pair at. It fluctuates constantly.

This is the price that a trader would ask for when selling the currency pair. The ask price also changes constantly and is driven particularly by market demand, although it’s also susceptible to economic and political factors.

A spread is the number you get when you deduct the bid (buy) price from the ask (sell) price. This difference is actually the cost of the trade and is extremely important for forex traders. You’ll often hear the term ‘tight spread’ – this means that the trading costs are low.

Pip is short for ‘point in price’ (but can also stand for ‘percentage in point’ and ‘price interest point’ depending on who you ask). To clarify, we use pips to measure price movements and changes in currency pairs. Pips are usually estimated to five decimal points. You’ll often hear traders say “I made 70 pips today”.

What is a position?

A position is a trade which is currently in progress. In trading, you can get long positions and short positions:

What currency pairs are most popular in forex trading?

While you can trade almost any currency pair in theory, there are certain pairs that are consistently the most traded. These are referred to as ‘major pairs’ and represent some of the world’s largest economies. These major pairs make up 80% of the entire trading volume in the forex market.

In forex trading, the various combinations of currency pairs have developed their own nicknames. Some are self-explanatory, some have historical meaning. Check them out below: 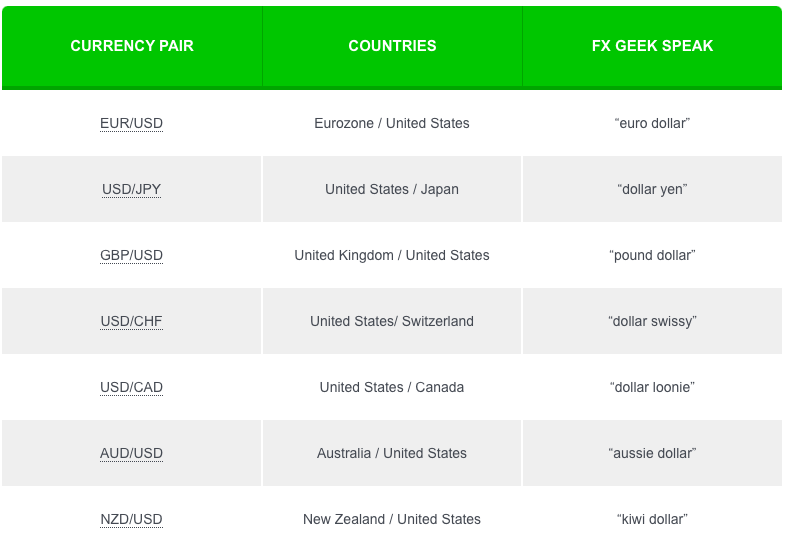 How do you start forex trading?

That’s where we come in. We can make you into a profitable trader in no time! Our mentors have the brains, over 50 years combined experience and know-how to match. They’ll teach the psychology, patterns, risk management, back-testing, technical and fundamentals and much more. They’ll share their personal trading strategies and teach you how to execute them in the market.

And it doesn’t end there! There’s so much to sink your teeth into! You’ll be pleased to hear that our mentors also stream live up to 4 times a day and you can chat with the fellow traders all you want! Ask any forex market related question you want and have it answered almost instantly. Exciting, right?

ForexSignals.com has helped 67,000 traders since 2012 so why not trying us out for yourself? After all, what have you got to lose?

Sign up for a free trial account today and take your first step to becoming a profitable trader. We’ll turn you into a winner!